Now that Lin’s on her way to becoming a full-fledged biker, and Yuri’s back on the road, it’s time to complete the circle. 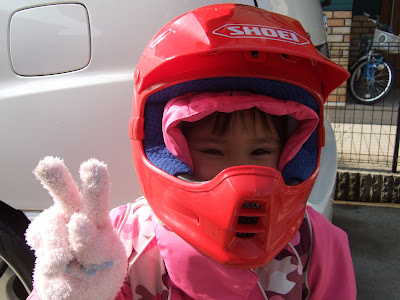 Mai turned four last month, so she’s now almost as old as Lin was when she took her first ride around the neighborhood.

When Yuri got her bike last month, I gave Lin a ride on the back, and Mai had been bugging me ever since about getting her turn. We had a spot of sun this weekend, so we decided it was time. 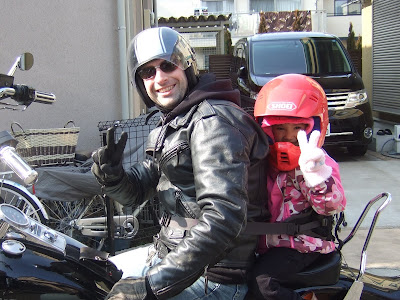 Mai’s not as fearless or adventurous as Lin, so we were worried that she’d get scared and decide she never wanted to ride a bike again, but sure enough, she’s the daughter of bikers. She reacted pretty much exactly the way Lin did, laughing and screaming with excitement the whole time.

It’s hard to believe this is the same little girl who was toddling around when Lin had her first ride three years ago.

(Speaking of Lin, Lin and I went to the bike shop to pick up some parts for Yuri’s new bike, and Lin immediately noticed the 50cc offroad bikes. Now she won’t shut up about how I need to buy her one.)

Now that Mai understands the joy of the road, we’ve completed our biker family, and we’re on our way toward my dream of taking family camping trips on two bikes.
Welcome to our world, Mai!

One thought on “Biker Blood III: Everything is proceeding as I have foreseen”