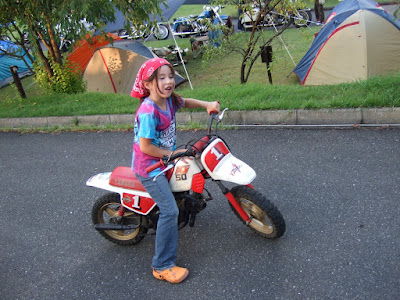 My little girl is becoming a biker even earlier than I expected.

I’ve tried to expose my six-year-old daughter, Lin, to bikes and biker culture as much as possible, and have been taking her on rides on the back of my bike since she was four. We’ve been building up to this for a while, with our short Father’s Day ride up Yabitsu pass and our camping trip to Nishi-Tanzawa, and last weekend we finally made the next big step: Lin’s first long-distance touring and biker rally at Matsumoto Camp.

As I’ve mentioned before, Matsumoto Camp is one of my favorite rallies. It’s smaller than many, with only 100-300 bikes, but both the location and the regular core of bikers that shows up are just the way I like them, and I thought it would be perfect for introducing Lin to the wider biker world. Unfortunately, most of the Takatsu-gumi group I usually ride with had other commitments, so only YOS was able to ride with us this time. 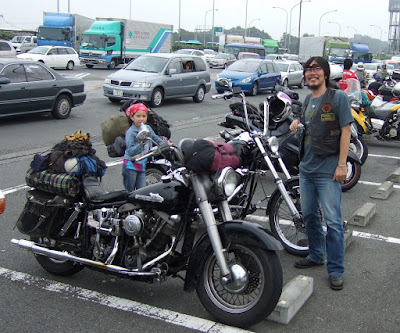 The weather forecast had been calling for rain all weekend, but I was pretty sure my usual understanding with the rain gods combined with Lin’s luck with these things would push away those clouds. Sure enough, the rain stopped by the time we woke up, and we headed out to meet YOS at Ishikawa under a gradually brightening gray sky, and by the time we got to Futaba, the halfway point of the expressway trip, we were riding under clear blue skies.

This was Lin’s first long expressway trip, and I wasn’t sure how she would deal with it, but beyond a few requests to stop and rest, she was fine. Of course, once we left the expressway and headed up the Venus Line into the mountains, she was more than fine. 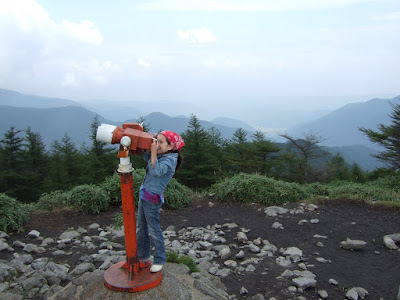 I let her have the camera, and she got some good riding shots of YOS on his shovelhead, and even took a little video from the back of the bike. 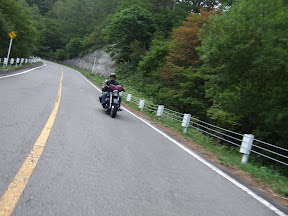 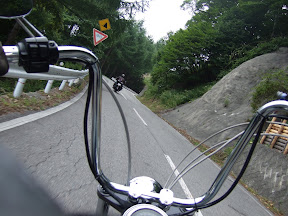 We stopped for lunch, but Lin couldn’t wait to get back on the bike, and left most of her soba uneaten. 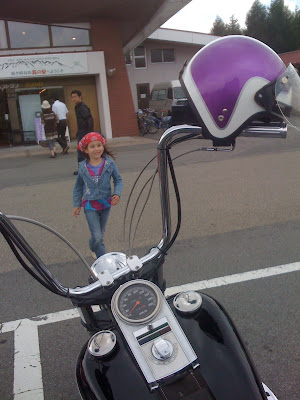 We rolled into Matsumoto Camp by mid-afternoon, finished greeting all our friends, and sat down to relax just as the downpour started. But who minds the rain once you’re safely under a tarp? It let up soon enough, and we went exploring around some trails near the campground, and then Lin went off to play with some of the other kids that local bikers had brought along with them. I went off to relax with beer and conversation, confident that I had successfully shown Lin how fun rallies can be, and that I could be sure she’d want to go to the next one too. 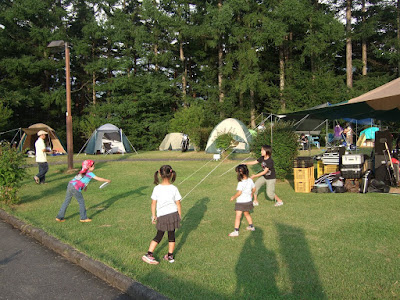 What I hadn’t anticipated was that Lin was about to take the next step toward bikerhood. The Heaven & Hell MC, who host the rally, had brought along a 50cc pocket bike to patrol the campground and run quick errands, but they were letting the bigger kids try it out when they didn’t need it. 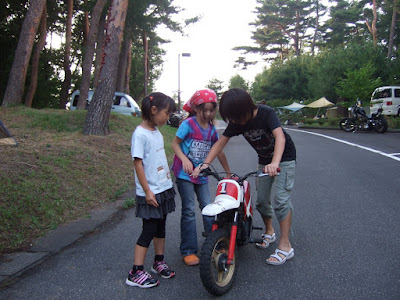 One of the older girls showed Lin how to work the throttle, and after a few tries, she got the hang of it. 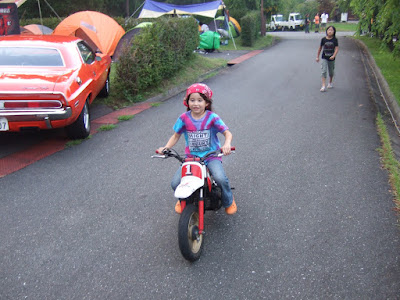 She and the other kids took turns on the bike for hours, and then started again first thing the next morning. By the end of it, she was riding like a pro.

It took me years on the road to learn to ride that naturally. Not bad for a kindergartener, huh?

So not only has Lin learned the fun of rallies, she understands the joy of riding as well. It’s too bad she’ll have to wait another ten years before she can get a license, but until then, it means I get a lot of biker-daughter quality time.Map view of this trip